Coudal Partners’ Fresh Signals refers us to a rather outstanding biography of Caroll Edwin Spinney that comes to us on the occasion of the actor announcing after just short of fifty years of playing the roles his intention. 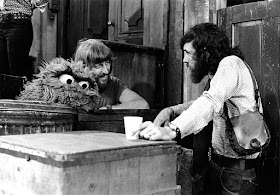 Jim Henson discovered Spinney at a puppetry festival held in Salt Lake City in the state of Utah in 1969 and impressed with his act invited him to join the cast of a project that he was starting up by the name of Sesame Street, creating the characters Big Bird and Oscar the Grouch. Dissatisfied with his salary initially, Spinney was poised to leave after the first season but fellow Muppet performer Kermit Love, who had himself besides not unfortunately being the namesake of the franchise’s master-of-ceremonies gotten his introduction to the craft by dint of employment as marionette maker in the federal Works Progress Administration, convinced him to stay, responsible for the design of not only Spinney’s roles but also Mister Snuffelupagus and Cookie Monster.
‹
›
Home
View web version